Today, I’d like to take a look at developments in things we’ve discussed in the past. Often, when journalist write an alarmist article about an upcoming event which then passes without a hint of the chaos that was predicted, it’s hushed up. Journalists and analysts seldom write ‘I was wrong’. I think they should. It can teach writer and reader a lot about how the world really works, about how events really unfold, and about the existence of coincidence. 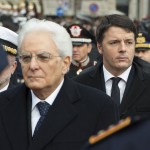 A couple of weeks ago I discussed Italian politics, usually a very hairy subject. But this time, it seems, I was wrong to predict trouble. The new Italian president Mattarella was elected after three rounds of voting on the 31st of January. Mattarella is a judge and will continue to fight against organized crime and specifically the mafia, which is the family business.

In the case of Egypt holding Al Jazeera journalists as dangerous traitors/terrorists, I was half right. I thought two of them, who hold foreign passports, would be deported as a result of their retrial. But now the only one of the three captives who has the extreme fortune of being white is back with his family, without even the retrial that was ordered on January 1st. Read more about the day he was released in this BBC article. While I’m really happy for Peter Greste, his removal from the situation isn’t good news for the other two. They are of Egyptian origin, though one of them is also Canadian and has given up his Egyptian citizenship. Pressure from Western governments to release them is probably (and sadly) far less ten

acious, not to mention public pressure in the west, which will mostly disappear after the Australian’s release.

It’s been a lot longer since I wrote about measures proposed to deter people from going to Syria to join the rebels against Assad. Recently, these measures became more poignant than ever as the Charlie Hebdo attackers had been in jail for involvement with violent jihad in the Middle East. Still, I stand by my earlier point. In a country that upholds the rule of law, you can’t punish people before they’ve done anything. Yesterday the verdict of ‘not guilty’ was passed on two young men who had intended to travel to Syria from their home in the Netherlands. They deny wanting to fight there, and were stopped in Germany. The Dutch prosecution had asked for two years in jail, but the judge decided not to punish men who hadn’t committed a crime. Although the prosecution had tried to prove criminal intent, the judge wasn’t convinced.

Picture of Mattarella and Renzi from Palazzo Chigi on Twitter.