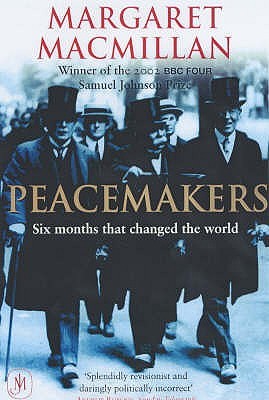 I’ve been warned against writing reviews that are too rave. A reviewer should be stern, fair, but critical. Trouble is, I rarely finish a book I don’t like. And I happen to think Peacemakers by Margaret MacMillan is absolutely brilliant.

I’ve been sitting here, trying to think of what might be a credible bit of criticism. The first I can think of is all the gossip. Each time a new character is introduced, at least a paragraph is devoted to his personal history, manner and tastes. More, if he’s very important. And there were loads of people involved in the Peace Conference in Paris of 1919. The world had consisted of empires and unimportant footnotes of history, but these six months created at least a dozen new nations. Each had their representatives. Some charismatic and successful, others just as justified, but boring/annoying/uneloquent and therefore unsuccessful. That’s highly relevant. In the world today, had roles been reversed, some countries might be bigger or smaller, some might not exist at all.

The second thing that might annoy readers is the emphasis MacMillan places on personalities. The message is, had the main characters been different, the outcome would have been different as well. I agree with this view. It’s clear that Italy would have gotten way more out of the peace had its leaders gotten along better with the other Allied leaders. This book shows the complicated world of negotiation. Personality is important, patience, priorities, guts and standing behind compromises made. At several points, the whole thing almost fell apart because one of the Great Powers wanted to renegotiate.

Overal I think this meticulously documented book is one of the best I’ve ever read. I’ve certainly learned a lot and have been very entertained along the way. I do think however, the conclusion is a bit unfair. Most of the details in the book didn’t come out until well after the second world war, especially the minutes the respective secret services took. At the time, the wrap up of the first world war was quickly fading from living memory, after it had already been pushed to the bottom of the pile by the atrocities of the second world war. The propaganda war had been won decades before by the criticasters of the Treaty of Versailles. Clearly, the Treaty was not to blame for the second world war. But the mistakes and compromises made by the peacemakers might have been. I don’t think all of the ifs on the last page have to be accurate. You never know what might have happened.