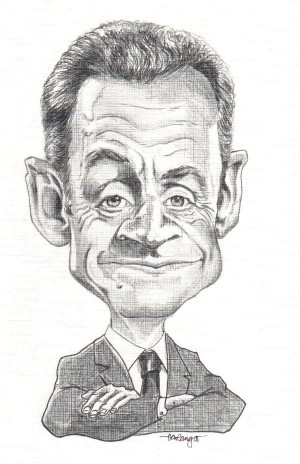 This very funny post appeared in social media from France, after former president Nicholas Sarkozy had managed to put himself in nearly every press photo of last Sunday’s manifestation. Sarko is back, thanks to the Charlie Hebdo Massacre. In the French presidential elections in 2017, it seems very likely the former president will at least have a fighting chance. Thanks to the Paris terror attack, the corruption scandals plaguing him since he left office might soon be forgotten.
Forget about Hollande’s improved approval rates after the attack, Sarko is seen as a hard ass with the right attitude to put a stop to this. Or so many a Frenchmen will think. The French are quite hard and militaristic. The military is omnipresent in the street, and soldiers and police carry big guns you’d never see on the streets of little old Netherlands (which is where I live).
The problem with this, as I see it, is that even though Sarkozy has a tougher security profile than the current president or any of his other likely opponents in the presidential race, he wouldn’t have been able to put a stop to the attacks had he been in office. As more information comes out about the attack and the attackers, I think it’s unlikely that anyone or anything could have stopped them. Not without sacrificing our open and free society. Charlie Hebdo is obviously a celebration of that free society. I don’t think, had we asked them last Tuesday, anyone there would have said: yeah, if a terrible terrorist attack happens and 12 people die, take measures that will stop the bastards, but that also put an end to freedom.