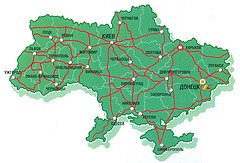 So, as I think I mentioned in the first post of the series on Ukraine, Ukraine as it is today has not been a sovereign state for very long. I’ve found this great list of maps that shows how the borders were laid out from 1400 AD. Please go ahead and study it for a while.
Welcome back. As you can see on TPM, the Ukranian nation had it’s own borders at only 3 points in history.

Foreign dominance for most of the country’s history begs the question, what makes Ukraine a nation? Well, there’s the Ukrainian language, and religion. Ukrainians have been Orthodox since the time of Kievan Rus’ (some Greek Catholic). But as Margaret McMillan argued in her excellent book on the end of WW1 (reviewed here), if you asked a peasant in the early 1900s what nation he belonged to, chances were that he couldn’t give you a straight answer.
And while the country was under foreign rule, its territory as it is today was divided. As you can see on the map, for most of modern history, the west was in Poland, the east in the Russian Empire and the south in the Ottoman Empire. This goes a long way to explaining the huge (ethnic) differences in the country. This bit of history may share some properties with the eternal question about the chicken and the egg: what came first? But Ukraine is certainly not alone in Eastern Europe to have many different ethnic groups within its borders. Before WW1 and WW2, the population was actually a lot more mixed than it is today. Ethnic purges by mostly Stalin and Hitler put a stop to that kind of chaos.
So when we’re going to talk next about nationalism, please keep this post in mind. From the 1800s Ukrainian speakers began to pay more attention to their own culture, eventually culminating in getting their own Soviet Republic in the 1920s and the country’s independence in 1991. But nationalism took on different forms and had different consequences in the Polish, Russian and (formerly) Ottoman part of what is now Ukraine.
—
This is the second post in a series about Ukraine. I’ll discuss the history of the country, and the origins of the current conflict. Is there a subject you think I shouldn’t miss? Have an opinion about what I’m saying? Please tell me in the comments.