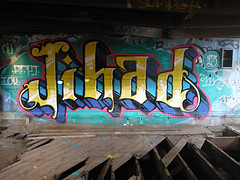 The title above is a quote by Winston Churchill. Supposedly, it’s what he answered when he was asked to cut arts and culture budgets in light of the expensive war he was fighting. I think it befits the current hysteria about young people who grew up in the west joining Islamic State (IS) even better.
Several European politicians are arguing that jihadi’s should be stripped of their citizenship. The measure is supposed to combat IS and to prevent acts of terror by returnees here in the EU. Joining the debate in the UK, Boris Johnson has even suggested that alleged jihadi’s should be presumed guilty until proven innocent. Dutch deputy prime minister Lodewijk Asscher has presented legislation which contains the revoking of citizenship as a last resort.
Revoking citizenship is an extreme result of us vs. them thinking. These people joined them, so therefore they can’t belong to us anymore. But is that what citizenship is? A club member card? If so, the club brings with it some extra-ordinary privileges, including a bunch of legal rights. Can they be summarily revoked? I’m not a lawyer, but I don’t see how, and more importantly I don’t see why.
All this is supposed to be defending the rule of law in our countries. A perfect oxymoron. What do we have the law for, if it’s flexible in the case of jihadi’s? Surely, SURELY, it’s better to try people who are alleged to have committed crimes abroad in a court of law and punish them when they’ve been found guilty? By putting them in prison? Not by stripping them of their rights?
I can’t see the politicians’ talk about the stripping of citizenship as anything other than a PR move. Look at me, being all decisive and forceful! It will never ever stand up in a court of law. That is, if the rule of law still functions in our land.
Do you disagree? Can you think of valid arguments to revoke jihadi’s citizenship? Please let me know in the comments!

PS. I could have written this same blogpost about Guantanamo Bay and water boarding, it goes without saying.