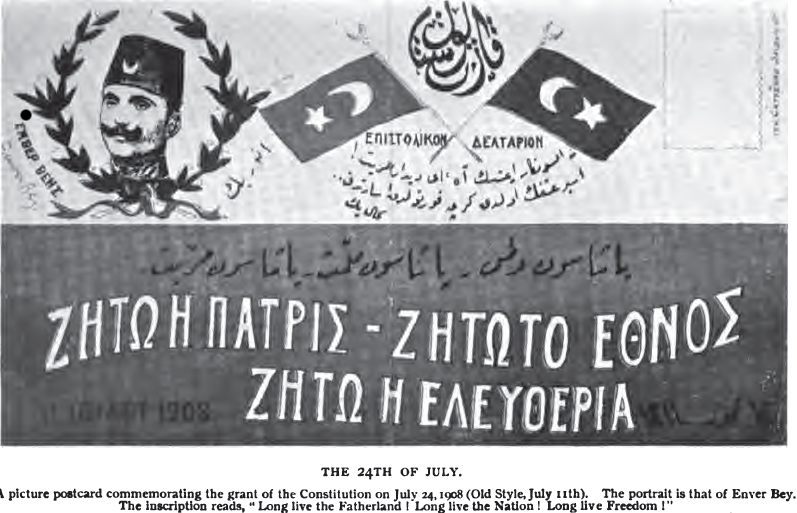 In 1908 the Young Turks, an unlikely mix of people who were unhappy with the Sultan’s policies, heralded the second constitutional era in the Ottoman Empire. They brought back the 1876 constitution (which had been abolished in 1878) and put a new Sultan on the throne; Mehmed V.
They originated as a secret opposition group with roots in universities and the military. After the 1907 Second Congress of Ottoman opposition they teamed up with groups who felt marginalized in the old Empire, like the Greeks and the Armenians. They called themselves the Committee of Union and Progress (CUP).
Geopolitics
In the first decade of the 20th century the Eastern European Empires struggled for control in the Balkan area. The Ottoman Empire had once controlled all of it, from Greece to Crimea. But from about 1830 onwards the Russian Empire and The Austro-Hungarian Empire had encroached upon its territory. Between 1903 and 1908 the Sultan slowly but surely lost control of Macedonia. The army that was stationed there joined the CUP in large numbers and marched on Constantinople. The Sultan had to give up his absolute monarchy.
Democracy
After struggling for power for a while the CUP defeated installed a constitutional monarchy with a multi-party democracy. But the different sections of the party didn’t stay united for long. A liberal section broke off in 1911, arguing in favor of decentralization of the huge multi ethnic Empire. The now ruling CUP remained centralist. This struggle culminated in the rule of the three pashas, who gained power in the Raid on the Sublime Porte. They allied the Ottoman Empire with Germany and entered the First World War (WW1) on the side of the Central Powers.
Economy
The gradual loss of territory put enormous strain on the inflexible Ottoman economy. By WW1 Western investors had taken over key economic infrastructure because the Ottoman owners defaulted on their debts. The Ottoman Empire became the first ‘Sick Man of Europe‘, a term that has since described any European country in an economic quagmire.
While the Young Turks introduced more freedom and democracy to Turkey, they weren’t able to fix the economic problems. At first they favored greater equality for different national groups within the empire, but after they lost their liberal branch the CUP became much more nationalist. Further loss of territory in the Balkan wars (1912-1913) exacerbated that tendency. Meanwhile, other groups living in the Ottoman Empire became more aware of their national identities as well. Notably, for our purpose, the Arabs in the province of Palestine.
—
This is part three of a series about Israel. Missing the Israel? This revolution had a profound impact on the history of the country, which will be discussed in the next post. Meanwhile, read part one and two.